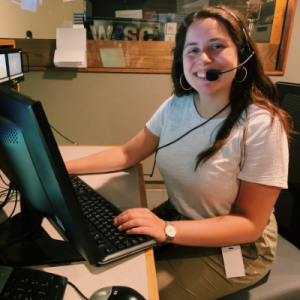 How did you end up working at WGN?

I took a TV class by mistake in high school and fell in love with it! I learned how to edit videos and write scripts and I carried that on throughout my time at UW where I took different classes and worked different jobs and internships that both broadened and sharpened my skillset. I learned how to be scrappy and resourceful, and how to speak up for myself and my team.

At UW I started a club called “Badger Broadcast Television” (BBTV) in an attempt to provide more opportunities for students to get involved in video storytelling outside of taking courses. My first “real” producing experience was an unpaid internship with WMTV (NBC15) the summer after my junior year. They hired me on as an Associate Producer after less than a month, and I stayed in that position through the first semester of my senior year. At the same time, I was also working video jobs at UW: one with SuccessWorks in the College of Letters and Science and one with the SJMC’s Center for Journalism Ethics.

I stepped down from WMTV in the first month of my last semester of senior year to collect myself – I was working three jobs, volunteering and trying to balance my coursework while also enjoying my final year at UW. But that didn’t last long, I accepted a job as an AP at WISC-TV (Madison’s CBS affiliate) a month later. I kept that position for a month before they hired me full-time as a producer on their morning show. That’s where I stayed for two years before making the 80+ market jump to Chicago.

What does a typical day in the office look like for you?

I’m in charge of building the first show of the day for WGN, which means I work overnights! I show up for work at around 11 p.m. and stay through the early morning, until after my show airs from 4-5 a.m.

The best way to describe what I do is to say I’m the “designer” of my show. I decide which stories go into the show, put them in a specific order, and choose when a viewer will see a video, a full-screen graphic, hear a sound bite, and the anchor.

When I arrive, I see what the nightside shows ran and what will still be of interest to a morning audience. I rework the content and try to find new elements to make it fresh and to continue the story. I include anything that broke overnight, and monitor national and international wires and WGN affiliates for new pieces to incorporate into the show.

WGN is different in that they’re also big on including fun, funny and sometimes just straight up ridiculous stories – something that will have the viewer (and the anchor) questioning if they just heard or read correctly. Finding those stories is a fun challenge, and helps bring out the anchors’ personalities.

Every day is something new. We run different stories every day, and even within the same day, something significant always changes before we go on-air, forcing me to think and work on my toes. I can’t say I’ve ever had a boring day at work. I walk into a blank slate every day and I work with a team that allows me to be creative and try new things, which helps keep it interesting for everyone else, from the anchors and directors in the studio to the viewers at home.

Digital Studies helped me build the fundamental video editing skills I use daily at my job. I learned how to use Adobe Premiere Pro while at UW and I use it every day to cut content for my show. The classes I took also helped me become more comfortable being creative and thinking outside the box, which I try to apply when thinking of new ways to showcase compelling video, or the best way to tell a story.

Create opportunities for yourself if none already exist for you.

I was so overwhelmed as a freshman coming to UW. I got denied from the J-school on my first attempt because I got a BC in Econ 101 my first semester. I was so discouraged, but I applied again. That’s when I realized I couldn’t take the video journalism courses until I finished the first few semesters of introductory classes. I wanted to be able to do something with video, and I just couldn’t find where that opportunity existed at the time. It’s why I created BBTV. I also made videos (for free) for local businesses who learned of me through that club. I offered to do projects for my sorority, and I started taking pictures and videos for another club (Sconnie Sports Talk) to sharpen those skills. None of these opportunities existed until I created them for myself. It never hurts to ask, and the worst they can say is no! You’ll get a lot of no’s in your career, so learning how to handle those in college is good practice.

Also,  no one owes you anything – especially in the world of journalism and non-fiction storytelling. A lot of the time, you’re talking to people about a traumatic event in their lives, and the person might not be comfortable speaking with you about it yet. Remember to give people space to be human, and when they’re ready, they’ll remember you treated them with dignity and respect, and will get back to  you if they’re interested.

I had less than a year of professional full-time work under my belt before the pandemic started, and it seems like the news cycle has only escalated from there.

I’ve covered a highly contentious election in a swing state, an insurrection, a civil rights movement, protests and riots, dozens of mass shootings, two impeachments, the death of a Supreme Court justice, the Russian invasion of Ukraine, and several landmark SCOTUS decisions being overturned — all while living through and trying to cover a pandemic.

I worked from home for about six months, producing my show from a laptop in my living room in the middle of the night while my roommate slept, and then turned around to see it air live on my living room TV. It forced me and my team to completely change how we created and presented our show, and whatever we landed on only lasted for a few months until the nature of the pandemic changed again.

It’s all been surreal and extremely difficult, especially having to navigate the news cycle as a producer and then also processing everything as a person separate from my job. This is all a long-winded way of explaining why I don’t think I can choose just one thing to be proudest of. On paper, getting a regional Emmy nomination for my 2020 Election show was extremely exciting, but I think I’m more proud of the fact that I’ve been able to help keep the communities I’ve worked and lived in informed throughout all of these experiences.