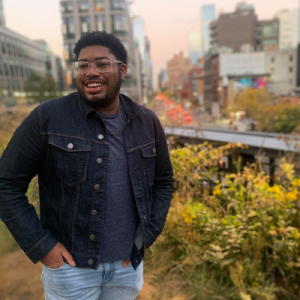 How did you end up working at WNYC/New York Public Radio?

I have always been interested in working in arts and media since I was a small kid. I wanted to be like Clark Kent in Smallville working at the high school newspaper so that’s what I did! I founded my elementary school’s first newspaper after joining the Technology Club at Francis Starms Discovery Learning Center. Then, I’d draw comics in my free time and use all of my parents’ ink reprinting copies for my friends. Later on, I became the managing copy editor for Rufus King International School’s newspaper, The King’s Page.

In college, I was super involved with the Sigma Lambda Beta International Fraternity, Incorporated and co-founded the campus chapter for National Association of Black Journalists. I also applied for a lot of internships! In the summer of 2014, I started a multi-summer internship with Wisconsin Public Radio as the Emma L. Bowen Foundation Fellow. I spent each summer learning with a new department: audience services, sponsorship, online/ digital and of course, live talk radio or “The Ideas Network.”

During my last two years on campus, I worked on the communications team at the Morgridge Center for Public Service.I started by writing the newsletters and then switched to social media, which I loved.

After I graduated, I didn’t land a job in the field immediately. But I kept working on passion projects, like when I was a kid. For example, I interviewed and profiled my friends for my blog. That work provided me with a great portfolio, which helped when Madison365.com asked if I could freelance for them in late 2018.

I love speaking to people within the community and sharing their perspectives. That’s why I love public radio, it’s rooted in community so when Wisconsin Public Radio asked me to come back for a few months, I was excited. Then, the pandemic hit. Luckily, I was able to extend my contract up to two years so I took a huge leap of faith and moved to New York City. I worked remotely for WPR and applied for jobs in the city. I was only unemployed for two months before getting the position as an associate producer for WNYC’s All Of It with Alison Stewart. I’ve worked here for a year now and I love it!

What does a typical day in the office look like for you?

I’m a producer for New York Public Radio’s arts and culture talk show, All Of It, hosted by Alison Stewart who some people might remember from MTV News in the 1990s. We have live daily conversations about culture and the culture in and around New York City.

Each week the show consists of interviews with film directors, television showrunners, actors, musicians, talent from both Broadway and Off-Broadway shows, visual artists, curators and others. As a producer, I am heavily involved in the editorial process of the show. This includes pitching new ideas, booking guests, scripting content, pulling audio clips, managing social media content for the show and helping set the host up for the best conversation on-air. Also, I get a lot of free tickets to arts and culture events in the city!

Recently, I completed the DEAR (Digital Evolution/Artist Retention) Fellowship for artists and arts practitioners of African descent through the Caribbean Cultural Center African Diaspora Institute. This program felt both transformative and empowering as a creative storyteller, reminding me of why I pursued the Digital Studies certificate in the first place.

Digital Studies pushed me to explore more of the creative facets of the news and entertainment industry. Through the Digital Studies program, I was able to produce a pilot for a comedy series that I am still working on. For my capstone, I expanded upon an assignment I did for Professor Eric Hoyt’s Com Arts 468: Producing for Internet TV and Video class. I learned how to produce a project alongside a team of other talented students.

Professor Hoyt also had us write and revise a business plan for this project. I intended for this series to come to fruition and still do. Right now, I am reworking the premise and script a little. I’ve already passed the age of the characters from the first script but I’ve had the opportunity to live so just maybe I’ll add what I’ve learned.

Did you have a favorite Digital Studies class or professor when you were a student?

I don’t think Reginold Royston and Eric Hoyt know how much I gained from their courses. I think about the material, assignments and lessons I learned often. For example, Prof. Royston’s LIS 500: Code and Power course is still relevant to examining our culture around digital spaces. I often think about how digital spaces evoke a sense of community, a kinship among users and the contributions of diverse minds to these apps, or lack thereof. This was before Elon Musk purchased Twitter and shut down employee resource groups (ERGs) which supported underrepresented employees. Then, Prof. Hoyt’s Com Arts 468: Producing for Internet TV & Video reminds me of what it takes to produce and finance a creative project. I learned how to pitch a new concept for a show, draft a business plan and work collaboratively in this course.

Don’t waste time over planning or creating some master plan! Network and collaborate with your fellow classmates while you still can.

I am proud of the conversations I’ve produced and the culture I continue to help cultivate around news, arts and entertainment today which includes diverse voices and perspectives.