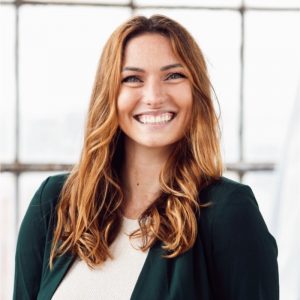 How did you end up doing freelance film work?

It actually all started during a class at Madison. It was a class where people who had graduated would come back and talk about their careers. Someone came back and was working as a producer at a coloring agency, meaning the company colored commercials. I was amazed – I had no idea that was a thing. I started doing more research and found my way into editing commercials and began interning. What I realized is I wanted more connection – something with more journalistic routes.

After graduating, I was watching an ESPN 30 for 30 and realized I wanted to work in documentary film. I cold called the major production / post houses in NYC, and ended up getting a job at Ark Media. From there, it was a lot of connections and working different roles to find the one that fit me best. My most recent projects can be seen on Netflix, Amazon, and Showtime!

What does a typical day look like for you?

My day-to-day responsibilities vary per project. On most projects, I am responsible for being the brain-bank for everything story related. This means I am entrusted to know the ins and outs of all characters, all story plots, and everything in-between. On my most recent project I am overseeing an entire team of people, planning film shoots, and working to get our indie documentary into the world!

Through the Digital Studies Certificate, I graduated with a better understanding of our changing media landscape. Twitter and Instagram were just becoming popular, and short form content didn’t exist. I’ve been able to work across multiple platforms because digital studies courses helped me see the value in learning every type of platform as it emerges, which has better positioned me for jobs throughout my career.

Did you have a favorite Digital Studies class or professor when you were a student?

I loved them all!

Enjoy your time at UW. I often felt pressure to know what I wanted to do as soon as I graduated and putting that pressure on myself didn’t help me. The best piece of advice I’ve ever received is to look at your career as a funnel (wide at the top and narrow at the bottom). Look at each job opportunity for the qualities and strengths it will add to you as an overall person. Don’t get too bogged down by if a job is the perfect fit, because you’ll likely never find that. View each job as a stepping stone to becoming the most full-rounded version of yourself – the person at the end of the funnel.

I am not done yet, but I know I will be most proud of my first film as a director. It’s in the works, and I’m already so glad I took the chance to pursue a story I saw as remarkable and began shaping it into something digestible, informative, and educational for the masses.